The 5S strategy is a robust Lean Manufacturing System methodology that provides a safe and efficient work environment. The S in 5S is easy to understand: Sort, Set, Shine, Standardize, and Sustain. 5S Examples of success stories: Toyota has encouraged many companies to implement 5S strategies to become successful, but many fail to succeed. So, why does 5S work for some while flopping so badly for other people? 5S should be tailored to fit every business’ needs and expectations.

It’s well-known that 5S is intended to improve productivity at work by sorting, setting, cleaning, standardizing, and sustaining rules of 5S. Organizations should zero in on 5S in their ongoing cycles to find success. 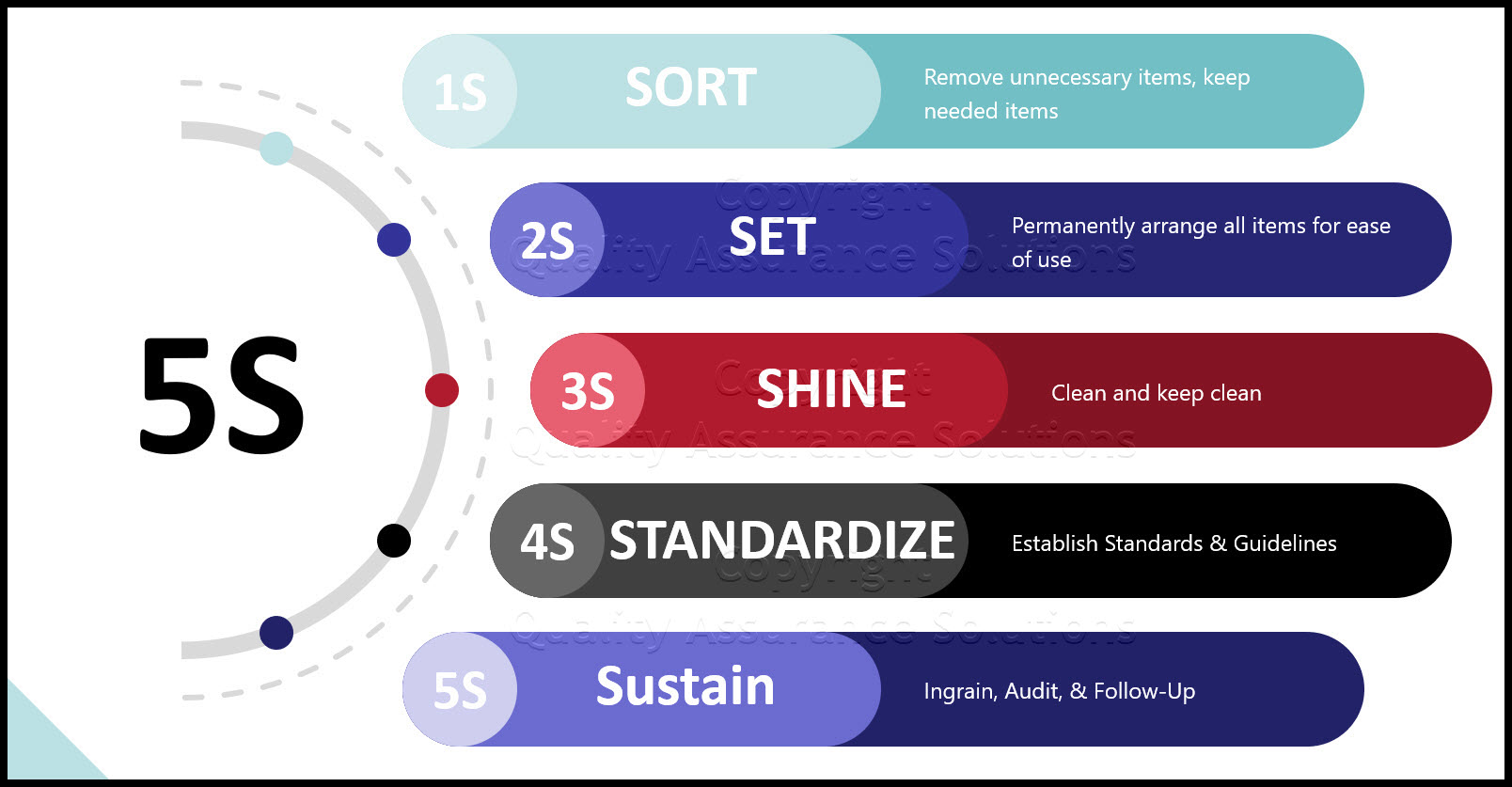 5S as Problem Solving: A perfect example of 5S comes from Dearborn Mid-West Company (DMC) and its mission to shift to lean Manufacturing. DMC began by looking at their design interaction and working on how things should be possible successfully. They thought about “why” to sort (SORT) waste and reduce it. In doing so, they had the chance to set all the required tools and equipment together closer to the workspace (SET together). A design review process is followed to find basic mistakes and reduce messiness, making cleaning more straightforward (Shine). At that point, DMC recorded many new cycles to develop different design consistency and productivity (Standardize). Until now, DMC has made 5S part of its way of life and everyday practices (Sustain).

DMC’s 5S process is not similar to other 5S methods used in different companies, and it highlights the power of 5S when used as a Problem-solving lean device.

5S as a Blind Application: 5S is often implemented without a thorough understanding of the circumstance or even the reason for implementing the 5S process in a system. A typical wastage of 5S happens in the workplace: An organization must work on its productivity and chooses to implement 5S. During the interaction, an expert convinces all workers that they must have similar tools on their worktable. Things that are not required are removed from the workplace, each workspace is managed similarly, and each device is marked. Consistence audits are scheduled to build confidence that the 5S is being followed.

“A non-stop blast of ‘why’s’ is the most effective way to set up your mind to understand the importance of 5S in a work environment”. Use it frequently,” said Shigeo Shingo with Toyota.

Careless or Blind sorting and setting without inquiring “why” for every circumstance can be awful. 5S is to take care of issues and make things work better. Also, raising questions is a crucial stage.

For instance, “why arrange individual work areas in a similar way when individuals often work in different ways?” If representatives are given a limited range of devices, some may not be able to work productively, creating unnecessary delays.

Every step of 5S should be focused on resolving proficiency and cost issues. 5S is intended to be flexible and can be adjusted for every office through open communication between executives and representatives.

A Commitment or Mandate?

5S with Commitment: Starting with areas of strength for complete implementation will take a long time to make 5S a part of the business culture. From the very first moment, the board should actively participate in the 5S stages by training and preparing workers. This cooperative process encourages the reception of 5S and its adoption as a way of life.

5S as Mandate: The most challenging way to implement 5S includes a progression of commands and some meetings to lead the interaction. Pioneers sometimes neglect to include all representatives and keep up with open discussion across the work environment. The lack of available posts creates confusion about the motivation behind 5S among workers, who feel they are being forced to implement something of no use.

A common 5S mistake most employers make is they feel that 5S is only a cleaning program, which neglects essential things. The motive of the third step (Shine) is to find how things are going bad by keeping a region clean. This step includes strong reasoning and expects employees to uncover and share the reasons for issues (leakages, material development, and so on), following those issues to find the source.

Lack of communication and training forces 5S to progress toward disappointment. Representatives who consider 5S a cleaning exercise don’t find basic mistakes, which may result in the closure of the production process. Workers who withdraw don’t follow 5S strategies.

When 5S is used as a Problem-solving methodology, its strength can be seen in the work environment. This lean device must be implemented with open and clear instructions. If something doesn’t fix an issue, it is because of the inefficient use of 5S.